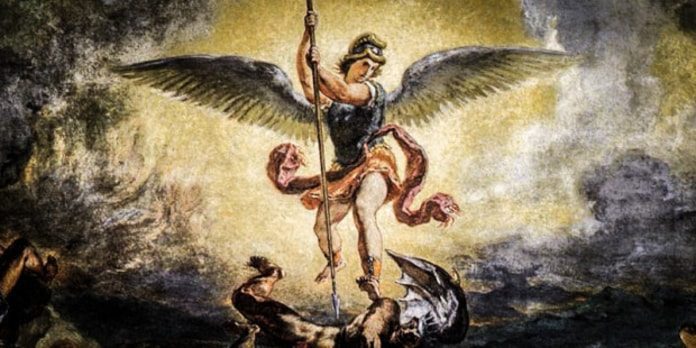 St Michael prayer – for God’s Protection and Strength. What is St Michael the archangel prayer for protection?

St Michael the Archangel is one of the greatest of the archangels. He is considered a healing angel, a protector, and the leader of the army of God against the forces of evil. The feast day of the St Archangel Michael is 29 September.

“St. Michael the Archangel,
defend us in battle.
Be our defense against the wickedness and snares of the Devil.
May God rebuke him, we humbly pray,
and do thou,
O Prince of the heavenly hosts,
by the power of God,
thrust into hell Satan,
and all the evil spirits,
who prowl about the world
seeking the ruin of souls. Amen.”

There is a short, ancient prayer of Saint Michael that all exorcists know and use.

Archangel Michael in the Bible

Angels are spiritual beings, and the Bible describes their function as “messengers”; they also praise and worship God, protecting and directing people.

As Matthew 18:10 says, “do not despise one of these little ones. For I tell you that in heaven their angels always see the face of my Father who is in heaven”.

There are different categories of angels, with appropriate missions and activities assigned to them. Archangels are God’s messengers to people at critical times in history. They have the most extraordinary love for all people and protect us and the earth.

Why should we pray St Michael prayer?

There is a real spiritual battle going on in the contemporary world. Christian teaching says that God made angels; some fell away in rebellion and are Satan’s servants. The fight for human souls continues in our days.

We strengthen God’s army forces against evil by praying St Michael prayer. In 1994 Pope John Paul II recommended praying for St Michael prayer: “I ask everyone not to forget it and to recite it to obtain help in the battle against the forces of darkness and against the spirit of this world.”

Pope Leo XIII wrote the extended version of this prayer at the end of the XIX century. This version is still used in our days for exorcism. History says Pope Leo XIII had a prophetic vision of the coming century of war and sorrow. In this vision, God allowed Satan to do his worst work against the Church in one century. The devil chose the XX century.

Consequently, this vision so impressed Pope Leo XII that he wrote a prayer to St Michael the Archangel. In the 1886 year, the Pope ordered this prayer to pray daily after Low Mass in all the churches in the Catholic world. This tradition was alive till the 1960s.

The Archangel Michael is the Patron Saint

St Michael prayer helps to fight evil forces in the world; also, we can pray this prayer asking for personal protection from evil. Therefore, join God’s army and stay on the side of light forces by constantly praying St Michael prayer.