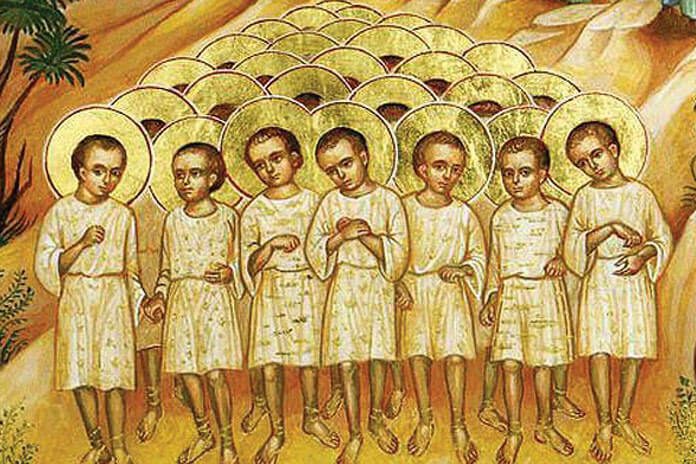 Holy Innocents Day is celebrated on December 28th. Soon after the great joy of the birth of Jesus, there is a time of great trials for Mary and Joseph. They must escape with their newborn from Herod, who wants to kill Jesus.

“When Herod realized that he had been outwitted by the Magi, he was furious, and he gave orders to kill all the boys in Bethlehem and its vicinity who were two years old and under, in accordance with the time he had learned from the Magi.” (Matthew 2:16).
Speaking about Holy Innocents, the children were killed for Christ’s sake. The Light had been born into the world, but the darkness personified by Herod did not want to receive it.

God, innocent children have proclaimed your glory not in words but in the death as martyrs. You have rewarded these babies, who cannot yet utter the name of Jesus, with the glory of Heaven. With your Grace, help us to exhort you in real works, in all our lives, not just in words. Give us your Grace today to be your witness all day. Heavenly Father, we ask this in the name of Jesus Christ. Amen.

It is not possible to determine the day or the year when these children were murdered. This should have happened no earlier than 40 days after Jesus’ birth. The reason this holiday is celebrated during Christmas time is that children gave their lives for the newborn Savior. Holy innocents are called holy and innocent not because they did not sin. They are holy by the grace God has given them.

The Church has always believed that those who have sacrificed their lives for the sake of faith, though not baptized, are in fact baptized by their death into Christ and with Christ. This is baptism by blood. Thus these innocent martyrs are called the first heroes of the Church.

St. Augustine in his work De civitate Dei (On the Kingdom of God XV, 28), speaks of the existence and existence of two great kingdoms in the world, the borders of which do not separate humans or societies because they are in the soul of every human being. These two kingdoms are made up of two loves. One is self-love that extends to the contempt of God (Amor sui usque ad contemptum sui) and the other is love to God to self-contempt (Amor suis usque ad contemptum sui). They gradually expand over time.

In these events that took place after the birth of Jesus, we can recognize these two kingdoms. One kingdom is the kingdom of light, because Jesus is the light of the world (John 8:12). The other one is the darkness that has come because of the disobedience of Adam and Eve, represented by Herod and his followers, the murderers who killed the unborn children. The splendor of Herod’s kingdom is misleading because behind it lies the intrigue.

The kingdom that came into the world with the birth of the Child Jesus is a Kingdom of light and love, for the King of this kingdom is himself Light (John 8:12) and Love (1 John 4:8). But Herod seeks to destroy it from the very beginning. This kingdom is based on the commandment of love, that we may love one another (John 13:34). It is by love among us that we will know that we are His disciples (John 13:35), subjects of the kingdom of God and not of the kingdom of darkness.

Saint Bonaventure says that “the greatness of the kingdom of heaven is the expanses of infinite love. It includes people of all languages, nations, tribes, and nations. No one is left behind, but this kingdom continues to expand, and with it, the glory of each of its children grows.” God’s law of love requires of us the sanctity of life that we cannot achieve on our own. The law of the kingdom of God requires that we love God with all our being and love our neighbors as ourselves (Mark 12: 29-31), that we do all things from the heart for the glory of God.

Jesus came for us because each of us was on our way to eternal destruction because of our wounded nature. He alone came to us as a holy, innocent child. His conception was holy, His birth innocent, His life without sin, His heart was never turned away from doing the will of the Father. On the Cross He served the punishment for us, thus providing our salvation. It is an incredible gift from God.

We can only respond to this gift we received at Christmas in the manger of Bethlehem with faith, the fruit of which is love. St. Bernard has said that “love makes you look for the one you love” and that “this search is the fruit and proof of love.” Let us seek Jesus to worship Him, just as the wise men who came from the East did. Let us not seek Jesus only out of our own interests as Herod did.