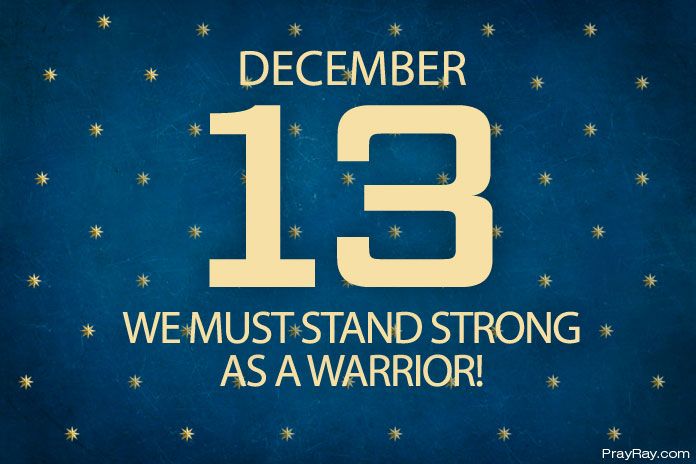 Advent. The coming of Christ – Prayer for December 13. When Christ comes, we become victorious because we have power over death and hell. We will reign with him forever.

When you are in Christ Jesus, you already have the assurance of victory over anything that may come your way. If while preparing for a fight, God shows you that at the end, you were declared the winner – what you will do is to approach the fight with much confidence.

Even if at the beginning of the fight, you were knocked down, you have that assurance, that confidence that won and then you stand to your feet and fight again.

What you are seeing is the end, you have the picture of yourself taken to be the winner. We have the confidence in Christ that he will come and when he comes, we will have victory – that should be what will make us fight with all assurance and confidence because we believe in him. Whenever something shows up to face you, take it up with the revelation of victory at the end, fight it like a Victor.

The Bible says in Romans 8:37 that “No, in all these things we are more than conquerors through him who loved us.” We have been declared a conqueror so we must start to fight as one.

The coming of Jesus Christ is so crucial to us as Christians, it brings an end to all suffering that every Christian have been facing here on earth. It is the time that everyone in this race will be crowned if end well.

The coming of Jesus is that which will end what we have been running away from, what we are scared of. Before then, we are still here in the world, we must stand strong as a warrior and fight anything that will challenge us.

The Coming of Christ Prayer for Today

Lord, I thank you for the privilege to be called your son. I thank you for declaring me a winner because, through Christ, I am more than a conqueror. When Jesus comes, we will be free of anything holding us back. But I pray that you give me the power to fight anything that may stand again me. Amen.

GOD HAS DESTINED YOU FOR GREATNESS Prayer for May 17

POWER OF GOD WORKING IN US Prayer for November 14