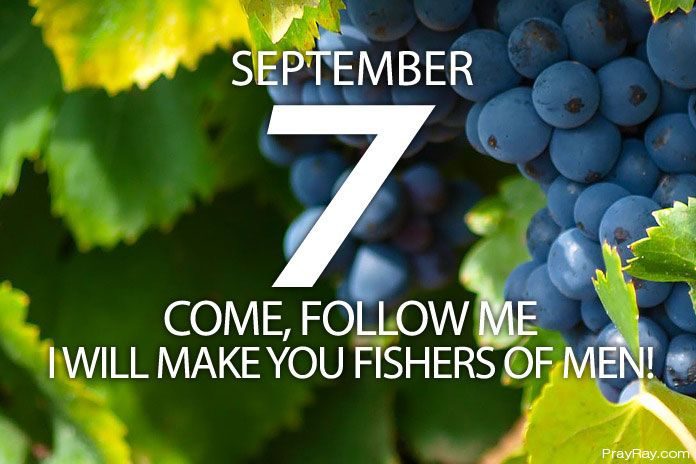 Be fishers of men – Prayer for September 7. Praise the living God, for He has done great things! I have a question for the people of God today, “when you look at your spiritual hands, what do you see?” Are your hands soft and smooth?  Or are they hard, blistered, and gnarled?

As Jesus was walking beside the Sea of Galilee, he saw two brothers, Simon called Peter and his brother Andrew. They were casting a net into the lake, for they were fishermen.
“Come, follow me,” Jesus said, “and I will send you out to fish for people.” (Matthew 4:18-19)

We are not only called to be soldiers in the Army of God but we are also called to be Fishers of men. In order to build an army, you must go out and recruit.

When you think about fishermen back then you think of strong, rugged types, hard-working men with big strong hands, gnarly and scarred from hauling up nets and wrestling with fish all day at times to bring them in, and sometimes they would have to launch out into the deep waters where other men feared to tread to make their catch. That’s also how most of us see Fishers of men. This is not something for the wimpy, in the natural or in the spirit.

There is not a lot of real fishing going on these days. Mega churches are just like today’s mega fishing boats that just sail out to a spot and just suck up hundreds, thousands of fish at a time and process, package and freeze them all before reaching shore. Today’s churches just invite everyone to come up and be “saved” walk them through prayer, give them some literature and slap the label “Christian” on them and send them on their way.

Where are the gnarled, scarred hands from doing the work of discipleship, launching out into the deep to pull in the deep-running fish like addicts, alcoholics, and the homeless? Those who have nothing to tithe but still need Jesus and His cleansing life-changing word.

Jesus has called us to be fishers of men, fishing for everything from “minnow to Killer Whales.” Sometimes we must go to where the “fish” is, and not wait for them to come to us. How do your hands look? God bless you all.

Be Fishers of Men Prayer for Today

Father God, we want the hands of a true fisher of men. Lord, help us to not be afraid to go wherever the fish are. Let us not be afraid to get our hands dirty. Father, help us not only to “catch and release” new converts but also to be educators of men. In Jesus’ name, we pray, Amen.

Also read: WE ARE GOD’S AMBASSADORS Prayer for September 6

WE ARE GOD’S BELOVED Prayer for December 17