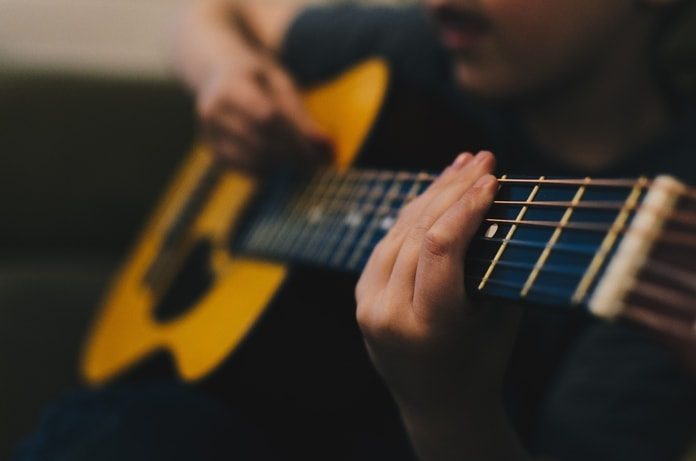 Most of us have seen young people playing guitars and singing Christian worship songs. Are you the beginner guitar player and want to try some easy Christian guitar song to play your guitar? Many popular Christian worship songs are really simple and easy to learn to play them on guitar. Most of them contain only four or five basic guitar chords. So don’t hesitate, take a look at proposed worship songs guitar chords. You’ll be surprised already after the first practice. These easy Christian songs on guitar are not only easy way to learn something new to play on guitar, but also the way to worship our Lord. Worship God for what He is and what He has done to each of us.

Here are some easy worship songs guitar chords that are really great for beginners.

Chris Tomlin is one of the best known contemporary Christian musicians. “How Great is Our God” was written by Chris Tomlin, Jesse Reeves, and Ed Cash. That song is one of the most popular worship songs. The song won “Song of the Year” and “Worship Song of the Year” at the 2006 GMA Dove Awards, and “Worship Song of the Year” again at the 2008 GMA Dove Awards. It is really easy Christian guitar song because it uses a simple and easy to memorize guitar chord structure. So it won’t take much time to learn to play this easy Christian song on guitar. There are many the free lessons on YouTube. One of such lessons is here for your convenience:

Worship song “Mighty to Save” music is written by Ben Fielding and Reuben Morgan. The lyrics of this song referring to Bible. They praising the might of Jesus as the mover of mountains as in Matthew 17:20 and God conquering the grave, so referring to Jesus Resurrection. The song became very popular and was translated into many languages. It is really easy to learn to play these easy Christian songs on guitar. Take a look at this video and try to play this worship songs guitar chords:

“10,000 Reasons Bless the Lord” was written by Matt Redman and Jonas Myrin. This worship song was recorded by Matt Redman on his 2011 album of the same name. “10,000 Reasons” won two Grammy’s and a Dove award for Song of the Year, so it’s really one of the most popular worship songs of all times. If you want to learn to play this song on guitar, it’ll take a little bit time, but it really worth to try. You can try to take a look at this video and after some training, you’ll be able to play this Christian song on guitar.

5. “Blessed Be Your Name”- Matt Redman

“Blessed Be Your Name” was written by Matt Redman and his wife, Beth. This song in part was a response to the tragedy of the September 11th attacks in the United States. This worship song says that we need to bless God’s name in times of plenty and in times of wilderness. in good times as well as in bad. God is present in all events of our life. Try to play this one of easy Christian songs on guitar. Chords and video tutorial are here:

The Christian worship song “Lord I Need You” is performed by  Chris Tomlin. It was written by Matt Maher, Christy Nockels, Daniel Carlson, Jesse Reeves and Kristian Stanfill. This song sounds like a confession. Want to learn to play this easy Christian guitar song? Check this video tutorial:

Choose one of the suggested worship songs guitar chords video tutorials or look online for other video lessons and start to learn today. God is really worth some your effort to learn to worship and praise Him for who He is and what He has done for us.