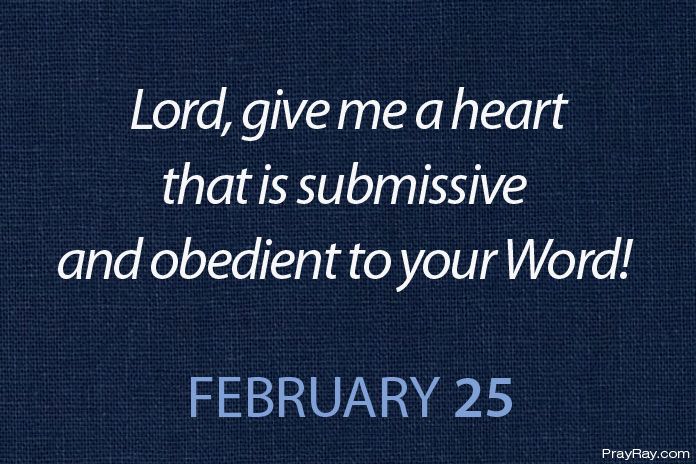 Being meek – Prayer for February 25. To be meek means to be gentle. And to be gentle doesn’t mean that one has low self-esteem or one is afraid of people. It is a choice to rather stay humble and be submissive to the higher authority. Let’s tell God to help us to be meek.

“Blessed are the meek, for they will inherit the earth.” (Matthew 5:5)

There is one great reward for those that are meek, and that is to inherit the earth. It means they will dominate and rule the earth when the arrogant ones would have been cut off. For whatever reason, this third beatitude in being misinterpreted many times by people. The reason is that they take the word “meek” to be something related to being afraid, thus becoming meek.

The meaning of meek according to the dictionary makes it, even more, glaring the reason why they people think those that are meek are tended to be vulnerable – which means they are likely to accept whatever is imposed on them. Some dictionaries used the phrase “easily imposed on”. This means those that are meek can be forced to do anything. Meek in the dictionary is described as “quiet”, “gentle”, or “submissive”.

Looking at the meaning from the dictionary, meekness can be misused or be described in the wrong way. The true meaning of meekness, though it has to do with gentleness, is purely to be submissive. Submission is the true meaning of meekness. When Jesus was talking about it, he was talking about those that are submissive. The reason why meekness can’t be taken as gentle only according to the words of Jesus is that one can be gentle and not submissive.

To be gentle means to be devoid of violence and to be tenderhearted – it does not necessarily mean that such would be submissive. Meekness has to do with both gentleness and submission. Those that are meek are unique people. They are the type that possesses a humble heart. The reason they are unique is that not everyone can give utmost respect to people that are less their age but hold a higher position. One may think, since they are in a high position, respecting them should be inevitable.

Being Meek Prayer for Today

Jesus Christ is the Foundation. Devotional for Today, January 25