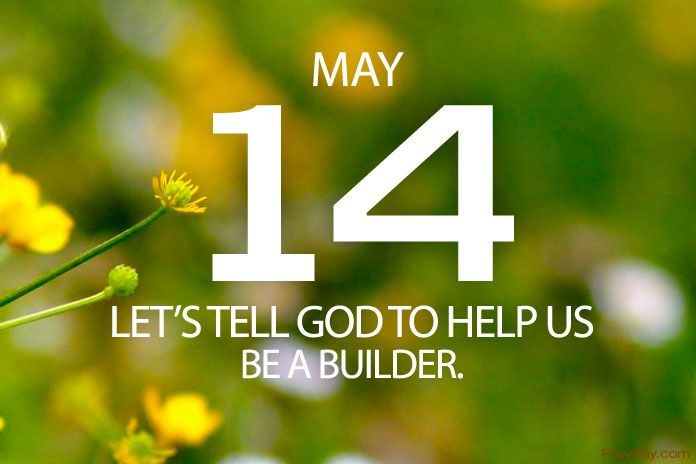 Let’s Build Faith in God – Prayer for May 14. We can either be a builder or one who scatters, we can do this with our attitude towards things or towards people but it is better to be a builder. First of all, we need to build faith in God. Let’s tell God to help us be a builder.

“According to the grace of God which was given to me, like a wise master builder I laid a foundation, and another is building on it. But each man must be careful how he builds on it.” (1 Corinthians 3:10)

Anyone who does not build according to the plans of God is a bad builder. Habakkuk 2:12 says, “Woe to him who builds a city with bloodshed and founds a town with violence!” Something we should know is that we can’t build perfectly by ourselves.

We need God to be able to build according to his will. Psalm 127:1a says, “Unless the LORD builds the house, they labor in vain who build it.”

We can build in different ways, everything we do in life involves building. We build ourselves by building our character, we build other people by encouraging them to do good things. When we handle a project or lead a team, with the way we handle it, we build. It takes God to help us build well.

Above these, let’s build faith in God in our hearts and make it a place for God to live.

Dear Lord, I thank you for the grace I have received from you to be a partaker of the great work you are doing in this world. If I am scattering things in any way with my habit or character, have mercy on me, Lord. I want to be a builder, I want to build myself up in you, I want to build for you, and I want to build faith in God and build for people by encouraging them in Christ – help me to achieve these things in Jesus name. Amen.

Also read: KEEP FOCUS ON GOD ALWAYS Prayer for May 13

CORRECT YOUR MISTAKES Prayer for January 7

WORK WHOLEHEARTEDLY FOR THE LORD Prayer for January 24