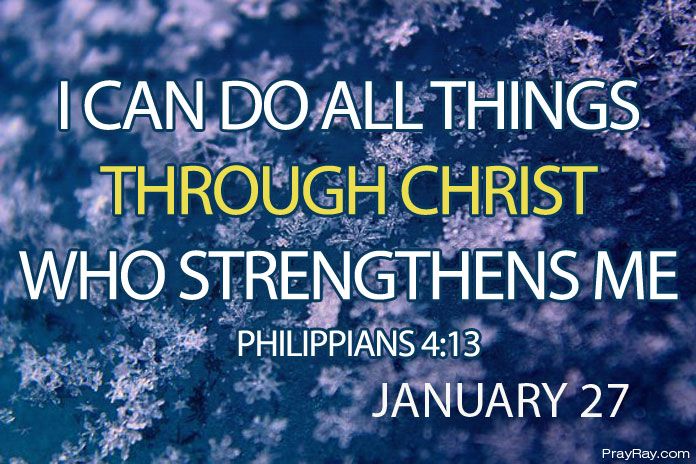 Do all things through Christ – Prayer for January 27. The power that we have in Jesus is unlimited. God is not limited and for this reason, we shouldn’t limit ourselves. Let’s use our abilities today.

“I can do all things through Christ who strengthens me.” (Philippians 4:13)

The problem we have as Christians is that we don’t use our powers. We have limited ourselves that we don’t even know when to fight. We face some problems that with just a little prayer all would be cleared but we close our mouth and refuse to talk.

Many times we have the ability to push forward and achieve greatness but we find excuses and then back out of the mission because we love to limit ourselves.

We have the power of Christ Jesus in us and we have his full backup. There is no reason for us to be afraid of becoming great or going deeper in achieving greatness.

The people that are known for great things in this world, the richest men and women, what they did to achieve this that they pushed beyond their limit. They never set limits for their selves but always pushing further and creating new goals and new targets. David went beyond his limits, he killed the beast and he killed Goliath with an ordinary sling. David’s limit when he was of that age must have been his mate, but he saw Goliath as an opportunity to go farther and be promoted.

God is our maker, he is unlimited, he parted the Red sea. He has done great things that no one can ever think of. When Jesus was on this earth, he had no limit, he performed some unexplainable miracles. If Jesus had not overcome limitations, he would have not been able to make such miracles.

We are in the image of God and God’s image does not have limitation in it. Whatever we are afraid of doing and we know that it is an opportunity to be great, remove the fear and cancel the limit. By the power of God, you can go further and set a new record.

Do All Things through Christ Prayer for Today

Dear Lord, I thank you for creating in your own image and in your likeness. In your image Lord, there is nothing like a limitation. I want to overcome my limitations, I don’t want to be limited, Lord. And I pray that you give me the power to move forward and go beyond my limits. Amen.

Also read: THE POWER OF YOUR WORDS Prayer for January 26

God Wants to Help You – Devotional for Today, January 15