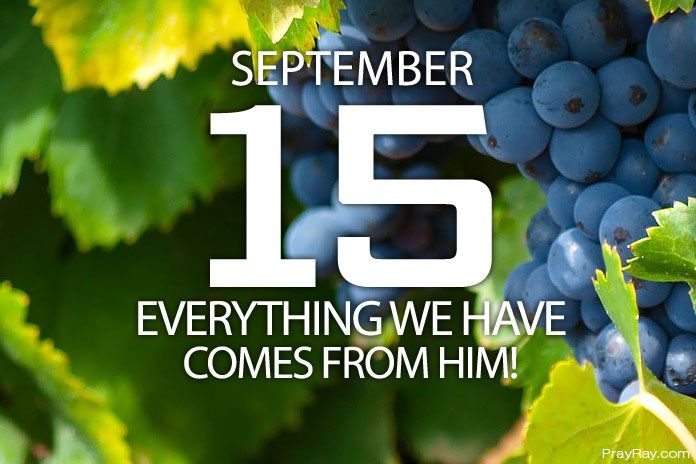 God takes care of his people – Prayer for September 15. Praise the Lord everybody! While watching old World War Two movies ever noticed how the soldiers called themselves G.I.’s? They called themselves that because everything they had from their underwear to their weapons had “government issued” stamped on it, even their toothpaste and toilet tissue. Thus, they began to think of themselves as “Government Issued”.

Jesus was not far from the house when the centurion sent friends to say to him: “Lord, don’t trouble yourself, for I do not deserve to have you come under my roof. That is why I did not even consider myself worthy to come to you. But say the word, and my servant will be healed. For I myself am a man under authority, with soldiers under me. I tell this one, ‘Go,’ and he goes; and that one, ‘Come,’ and he comes. I say to my servant, ‘Do this,’ and he does it.”
When Jesus heard this, he was amazed at him, and turning to the crowd following him, he said, “I tell you, I have not found such great faith even in Israel.” (Luke 7:6-9)

In Luke 7:6-9 a leader over soldiers in the Roman army asks for Jesus to heal his servant whom he is very fond of. What the Centurion was saying to Jesus was, I like you am a man with authority over people, in this case, soldiers and servants.

Jesus was also a man of authority. Spiritual authority was evident in his preaching, teachings, and how He was able to perform miracles. And His people were His soldiers. Who are His people? Those of us who are of the household of faith. We are His people and as such we are also His soldiers.

Everything we have is “God Issued”

We are called into service by God and are trained in our churches. Everything we have is “God Issued”. The word of God says, “the earth is the Lords and the fullness thereof.” Everything we wear, eat, and own comes from Him. It is all stamped “God Issued.”

Just as soldiers of the world depend on the government for everything, soldiers of the Lord should be fully dependent on Him. In the worldly army if you have a problem you must follow a long chain of command before somebody hears you. In the army of the Lord, the chain of command is from us to Him. Jesus on the main line, hallelujah! We are G.I.’s for Jesus, God issued, and God maintained. God bless You all.

God Takes Care of His People Prayer for Today

Also read: GOD’S PURPOSE FOR MY LIFE Prayer for September 14

BEING FREED FROM BONDAGE Lent #day 31

GROWING IN CHRIST Prayer for October 4