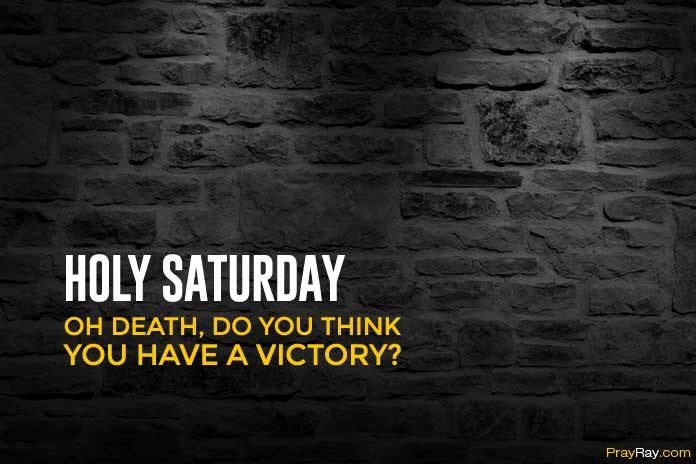 Jesus Body Laid in the Tomb – Holy Saturday 2022 Significance, April 16. After Jesus was nailed to the cross, he was buried in a tomb. He went down to the grave and set us free from death and the grave’s power.

Jesus Body Laid in the Tomb Bible Verse for Today

“Joseph took the body, wrapped it in a clean linen cloth, and placed it in his own new tomb that he had cut out of the rock. He rolled a big stone in front of the entrance to the tomb and went away.” (Matthew 27:59-60)

Joseph, who pleaded for the body of Jesus, was an influential man and a Jew. He constructed the tomb for himself but, in the end, hosted Jesus for three days. The Roman authorities crucified Jesus. According to Roman practice, anyone killed in this manner would not be buried; instead, the body remains on the cross until it decays.

For Pilate to release the body of Jesus Christ for proper burial shows that there is a divine intervention for that to happen. Jesus had already foretold his Resurrection – therefore, Pilate shouldn’t have considered granting the wish of Joseph, but it has already been written by the prophets (Isaiah 53:9).

The reason went into the tomb is a mystery. He went to set the captives free, those held in darkness and the shadow of death. It is good news that Christ went down to the grave to bring life from death, light from the darkness.

Death came to man to the human race through Adam but glory be to the name of the Lord, he has won the battle over death for us, and now we are free from the consequence of sin.

This 2022 year, Holy Saturday, falls on Saturday, April 16. Holy Saturday is the final day of Lent, a day before the Easter – Jesus Resurrection day. On this day, Jesus’ disciples mourned his death. So during this day, all Christians commemorate and reflect on the Passion and Death of Jesus Christ and prepare for His Resurrection.

It is a day of both- sadness and joy simultaneously. Holy Saturday is a day of reflection, waiting, hope, and prayer.

Jesus Body Laid in the Tomb Prayer for Today

Lord Jesus, I thank you for conquering death and the grave for my sake. Thank you for your sacrifice. Now I have an assurance of life in you. Help me appreciate what you have done for me by doing what is right in your sight. Amen.

Also read: GOOD FRIDAY What does the Crucifixion of Jesus Christ mean

Lack of Goodwill is a Sign of Immaturity, Devotional for Today...