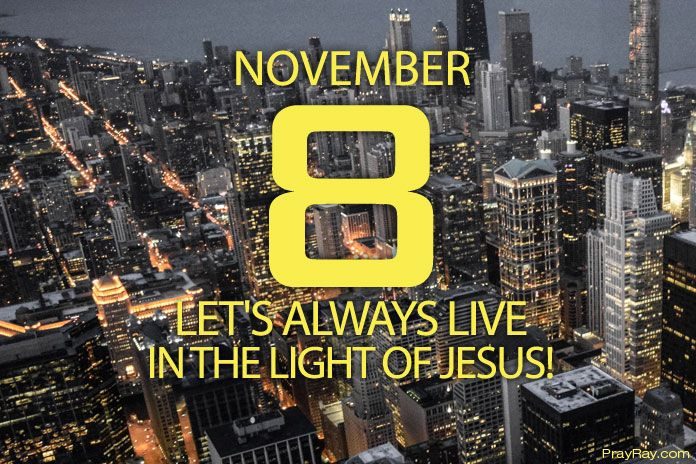 We are living in the light of Jesus – Prayer for November 8. Praise the Lord, everybody! As Christians, God has called us to be a lot of things. We are called soldiers, conquerors, and holy, among other things. Today we’re going to discuss one of those things: the non-peculiarity of the Body of Christ.

But you are a chosen people, a royal priesthood, a holy nation, God’s special possession, that you may declare the praises of him who called you out of darkness into his wonderful light. (1 Peter 2:9)

For years, the Christian Church and its members have been seemingly trying to be non-peculiar rather than peculiar. But unfortunately, on many occasions, we have been guilty of attempting to integrate worldly practices into our churches, from dancing to rap music and mimes.

If we feel that the only way to bring in the lost to Christ is by offering them entertainment and a listener-friendly Gospel, then we are in for a surprise when Jesus comes back for His Church.

God wants us to win people by what we say and how we live. The world is in darkness, and those who live in the light must show a distinct and attractive alternative lifestyle to those lost in darkness.

Living in the Light of Jesus Prayer for Today

Father God, thank you for calling us out of darkness into your marvelous light. Help us to be the peculiar people you have called us to be. Lord, help us to live lifestyles attractive to those that are lost. Let’s always live in the light of Jesus. In Jesus’ name, we pray. Amen.

Also read: FAITH IS THE KEY TO THE KINGDOM OF GOD Prayer for November 7

SHINE AS LIGHT Prayer for January 28