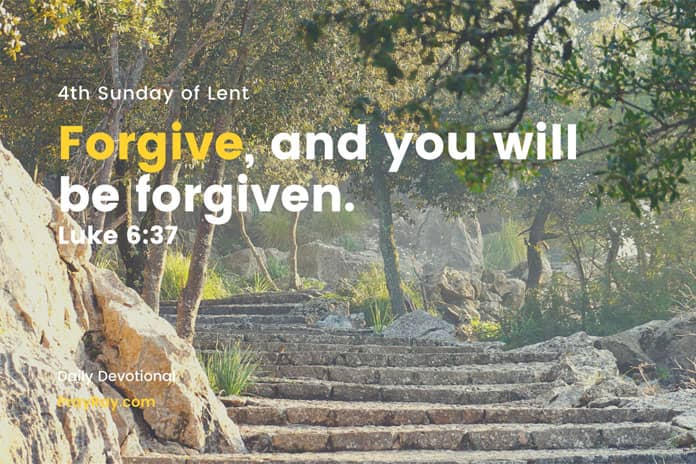 Devotional 4th Sunday of Lent. Jesus’ listeners were tax collectors and sinners. On the one hand and Pharisees and scribes on the other. Jesus, in word and deed, proclaims to them the mercy of God. But the strange thing happens: not the pious and righteous accept this proclamation and rejoice over it but of all people the far from God and criminals.

When he came to his senses, he said, ‘How many of my father’s hired servants have food to spare, and here I am starving to death! I will set out and go back to my father and say to him: Father, I have sinned against heaven and against you. I am no longer worthy to be called your son; make me like one of your hired servants.’ (full text at Luke 15:1-32)

Every Action has Consequences

Once again, look carefully at what Jesus says in this parable. The younger son leaves home and throws himself into the whirlpool of the river of life to enjoy it as much as possible.

This pattern of behavior is repeated over and over again. At first, this young man does not even notice the consequences of his actions; he forgets his father, i.e., God, and sees only the surface of life, material things, apparent friendships, superficial distractions, etc.

When his money is exhausted and he finds himself with pigs, he only comes to his senses. Then, inner emptiness and disgust overwhelm him. Suddenly he realizes what he has been missing: a father, a good relationship with God, which he broke off for supposedly more awesome things.

“We are doing well,” people sometimes boast. Only when worse times come again does the false euphoria fade, and the lies of life are revealed.

Lucky Who Realized he was Wrong

“When he came to his senses.” In other words, he looked at himself and the reality of his life. This is a fateful turning point.

Shocked by his behavior, he remembers his past and sincerely regrets his wrong ways. Going inward is a return, a rediscovery of oneself where God is waiting. For – as Augustine confesses – “You were in me while I was wandering outside, like a shadow of myself.”

The son returns to the father, the father of all fathers, who is Love. It takes courage, but not as much as the son thought beforehand because the father is already coming to meet him, embrace and kiss him, and invite him to a feast of joy.

No reproaches, no accusations, no punishments! It is enough that the son blames himself.

A line is drawn behind what has happened – once and for all!

What joy must have arisen in the son’s heart; he had already felt his death, now he is alive again, lost and found again!

God our Father, show your infinite love and mercy to all people.
We ask you to give us the strength to forgive one another as you have forgiven us.
God of love, you are infinitely merciful! With you, all our hopes are in safe hands. We trust in you when we make our requests to you.
We ask this through Jesus Christ, your Son, our Lord, and God, who lives and reigns with you and the Holy Spirit forever and ever. Amen.

HAVE A LIVING FAITH Prayer and Bible Verse for June 4

TEST YOUR FAITH IN GOD Prayer for July 24