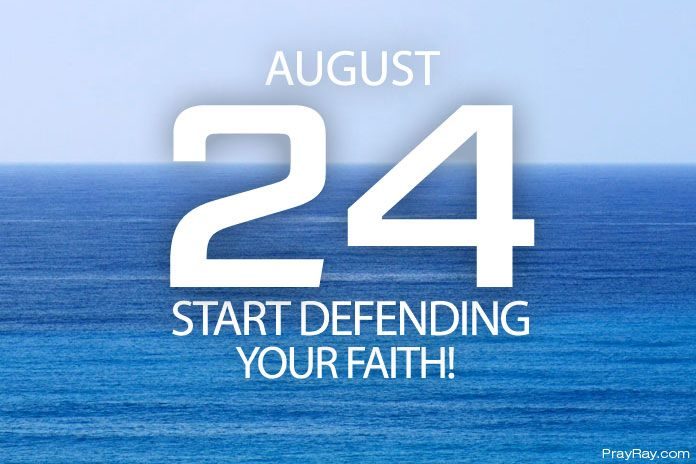 Defending your faith – Prayer for August 24. Praise the living God, for He has done great things! Have you ever had days where you have woken up and did not want to get up because you just could not face another day of fighting to defend your faith? The following is for those of us who have.

“The Sovereign Lord has given me an instructed tongue, to know the word that sustains the weary. He wakens me morning by morning, wakens my ear to listen like one being taught. The Sovereign Lord has opened my ears, and I have not been rebellious; I have not drawn back.  I offered my back to those who beat me, my cheeks to those who pulled out my beard; I did not hide my face from mocking and spitting. Because the Sovereign Lord helps me, I will not be disgraced. Therefore, I have set my face like flint, and I know I will not be put to shame.” (Isaiah 50:4-7)

The Bible is full of the stories of all kinds of men, some good and some bad. There is a group of men whose exploits of faith are renown. Men such as Noah, Abraham, Daniel, David, Joseph, Isaiah, Job, Peter, Mathew, Mark, Luke, John, Paul and the list goes on and on. They were men who were determined to serve God.

Were they perfect men? No, but they were fully persuaded that they were going to serve the Lord. In season and out of season.

I can imagine there were a lot of days when these men were tired of fighting what must have felt like an uphill battle. The world at that time was very much into multiple gods, the more gods you worshiped the better they felt. They had food gods, water gods, air gods, love gods, healing gods, and money gods, along with a whole host of others. Only a few believed in the one God, Jehovah God, the God of Abraham, Isaac, and Jacob.

Yet they persevered, every morning setting their faces like flint, determined, because they believed what the above scripture states, that their faith would not let them be put to shame or disgrace because God was with them to help them go through. So, when those mornings come where you feel like you can’t go on, remember these men.

Pick up your Bible and read their stories, then get up and set your face like flint, and trust God. Start defending your faith. God bless you all.

Defending your Faith Prayer for Today

Father, we want to thank you for your word, that tells us of “flint faced men” who kept the faith no matter what. Help us to remember these examples. And your word that tells us that you are with us always so that our faith would not be put to disgrace. My Lord, I promise to defend my faith always. In Jesus name we pray, Amen.

PRAISE YOUR FATHER IN HEAVEN Prayer for July 27

WE ARE GOD’S CHOSEN PEOPLE Prayer for August 6