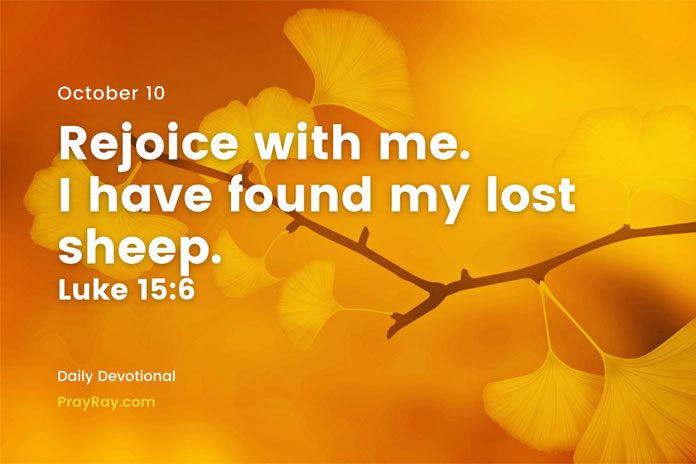 Devotional for Today, October 10. God is waiting for you. He stands in the yard for hours, looking at the horizon, hoping to see you come home.

And when he finds it, he joyfully puts it on his shoulders and goes home. Then he calls his friends and neighbors together and says, ‘Rejoice with me; I have found my lost sheep.’ (Luke 15)

Jesus gives us three beautiful parables about the “lost,” the lost sheep, the lost money, and the prodigal son. In them, Jesus emphasizes how God is delighted when a lost person allows himself to be found again.

But Jesus is well aware that his day’s religious leaders were hostile to God’s image as a loving Father. And that is understandable. They were living in Old Testament terms, where God is portrayed as a harsh judge, and the punishment for sin is inevitable, not only for the sinner but even for his children, even his grandchildren.

That is why the prodigal son’s parable includes the elder son’s story. In speaking of his anger and withdrawal, Jesus says directly to all who oppose God’s plan and His love.

Jesus speaks lovingly to them and the Pharisees, scribes, and religious leaders. Then, as a loving father, God goes out to his angry and rebellious eldest son and calls him with great love and concern.

We need to understand the true meaning of these situations if we want to live according to God’s will. We must not limit ourselves to the primitive interpretation that the Pharisees and Scribes were just hard-hearted hypocrites. On the contrary, many of them were genuinely holy men of God. But they failed to see God’s thought as showing the way for humanity. God is waiting for you!

Heavenly Father, You love me. So often, I turn away from You, get angry, and do not understand You. But You remain patient and faithful. Your love allows me to learn. I thank You so much for this. To know You, Father, and to love You is the best experience of my life. Amen.

The Holy Spirit Leads to the Truth. Devotional for Today, January...