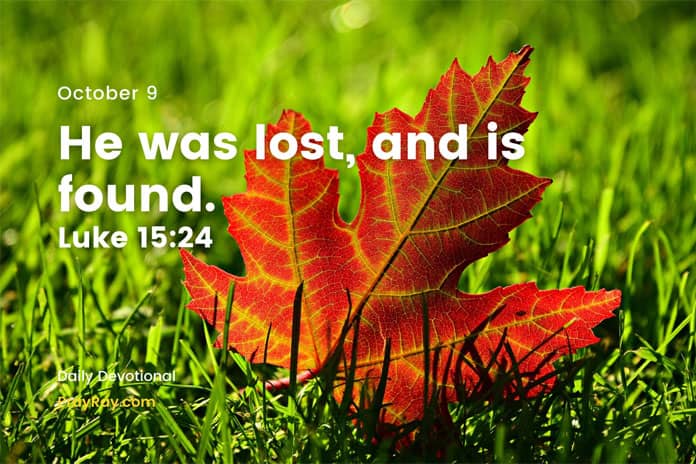 Are you also a prodigal son? Devotional for Today, October 9. The parable of the prodigal son speaks most powerfully of God’s love.

‘My son,’ the father said, ‘you are always with me, and everything I have is yours. But we had to celebrate and be glad because this brother of yours was dead and is alive again; he was lost and is found.’ (Luke 15:11-32)

Perhaps this parable should more accurately be called the parable of the infinitely loving father because the father’s love is at the heart of the story.

The first thing to note is that the younger son takes his father’s inheritance and goes to a pagan country to escape God’s commandments and enjoy himself there without any restrictions on moral standards. It seemed to him that this was true freedom.

This lifestyle led him to such a moral collapse that he wanted to eat pig food. In this situation, he suddenly realized that he had lost more than money, dignity, and reputation. He had lost his faith.

This parable is very realistic. The prodigal son’s first concern is that he has nothing to eat, and he remembers how his father’s house was full of everything. (Luke 15:16-18)

Shockingly, it took the most primitive and despicable motive for a son to return to his father’s house to be forgiven.

This is God. His love understands that man is often so weak that he cannot lift his heart above food and material wealth. God understands that sin has killed the seedlings of nobility and hope in his lost creation. He has lost the ability to see beyond the primitive desire to survive.

Therefore, God shelters the prodigal son as he is in this life situation. But, at the same time, he gives the son another chance to start life anew.

This is the position of God proclaimed by Jesus. And many who see life only from a human point of view have found Jesus’ language absurd.

Heavenly Father, I often find myself repeating in prayer the words of the lost son, “Father, I have sinned against Heaven and You. I am not worthy to be called Your son”. But each time, You embrace me with love and mercy. You forgive my sins and give me a new chance at life. You restore my dignity. I am immensely grateful to you. Could you give me the strength not to give up? Please give me the wisdom to see the temptations. I ask this in Jesus’ name. Amen.

UNDERSTANDING THE WILL OF GOD Lent #day 13