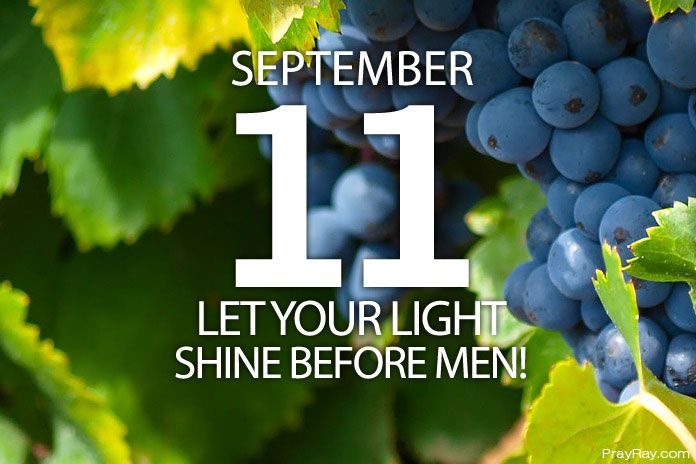 Let your light shine before men – Prayer for September 11. Praise the Lord everybody! Throughout history Christians for one reason or another have denied Christ. Today’s Christian does it with “passive denial.” We deny Him without even knowing we’re doing it.

Then seizing him, they led him away and took him into the house of the high priest. Peter followed at a distance. And when some there had kindled a fire in the middle of the courtyard and had sat down together, Peter sat down with them. A servant girl saw him seated there in the firelight. She looked closely at him and said, “This man was with him.”
But he denied it. “Woman, I don’t know him,” he said. (Luke 22: 52-57)

Peter, who was always very zealous in His faith when he was with Jesus and the other disciples suffered a lapse of faith after seeing “the Christ” taken away without a fight, and even though Jesus had warned them that this had to happen so God’s plan could be fulfilled. He like most of us did not understand God’s plan and that lack of understanding led to a lack of trust. After everything, Peter had seen and heard he forgot it all when the pressure was on for him to stand on that faith.

We do the same things when are around our non-Christian friends and coworkers and the conversation sinks to a level where the Holy Spirit says “alright it’s time to step away” but we linger until we are caught up in the flesh and Gods spirit is grieved within us.

Or we do walk away and then we are asked by someone “why are you leaving? too much for your virgin ears?” and instead of using the opportunity to proclaim whose you are and whom you serve you just smile and say “no, I just have to get back to work.”

As you walk away basically doing the same thing Peter did, deny Christ. This is following Christ afar off, the modern version. We loosely follow Christ, close enough to claim to be followers, but far enough away to blend into the crowd when need be.

God is ashamed of those who are ashamed of Him. (Luke 9:26) Christians should let their light shine before men so that it can be seen by others and they in turn would glorify God because of it. We can not “passively deny” God by walking away from every opportunity we get to claim Him and glorify God. God bless you all.

Let your Light Shine before Men Prayer for Today

Father God, forgive us for those times we passively denied you, at work, at school, and wherever else we might have done it during our daily activities. Lord help us stand up and acknowledge you no matter where we are or who we’re with. Let your light shine before men. In Jesus’ name, we pray, Amen.

Also read: WALK AFTER THE SPIRIT AND NOT AFTER THE FLESH. September 10

When he Came to his Senses. Devotional 4th Sunday of Lent

Jesus Enters our Daily Lives. Devotional for the Third Sunday of...