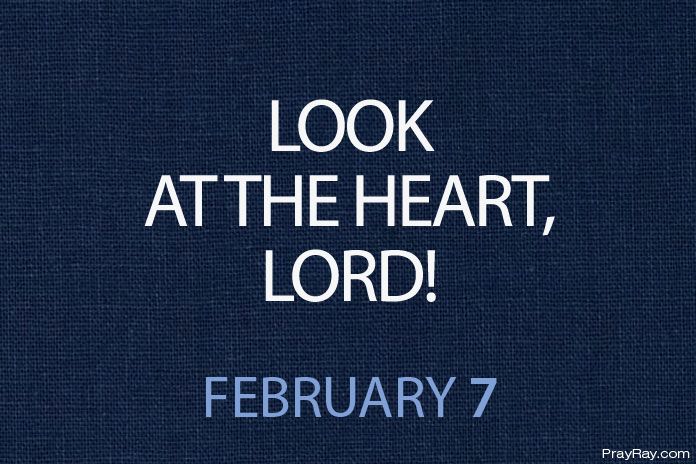 Lord looks at the heart – Prayer for February 7. Sometimes age matters in most things we do, for example, to do some jobs there is an age limit or requirement. But in the work of God or Christianity in general is age an important thing too?

The Bible Text is about the story of Samuel in the house of Eli. As the mother, Hannah promised God that she would make sure the son stay in the house of the Lord. She fulfilled her vow and put Samuel in the house of the Lord. At that point, the sons of the Prophet, Eli, sinned against God and God promise to punish them. Now there is no one to take over from prophet Eli when he was old. God had to call on Samuel and used him. Samuel was small when God first called him. At first, he couldn’t discern the voice of God but later he got used to it.

When David was anointed by Prophet Samuel, he was just a boy. Samuel looked at the other sons of Jesse, he thought what God looks at is age but God made it clear that age doesn’t matter when it comes to calling. 1 Samuel 16:7 “But the Lord said to Samuel, “Do not consider his appearance or his height, for I have rejected him. The Lord does not look at the things people look at. People look at the outward appearance, but the Lord looks at the heart.”

This is for us to know that God doesn’t mind your age, what is important is the heart and he could use anyone he chooses to use. Sometimes we think that to handle some particular post, maturity is required and age matters. Joshua was just a youth when he took over to start leading the children of Israel.

If God chooses to use you, he will give you the wisdom needed and the strength like Solomon and he will never leave you.

Lord Looks at the Heart Prayer for Today

Lord, I know I am not too small to be used in my generation, I pray that you make worthy of your work. Lord, place me in a position that will make it possible for me to affect lives positively. Let people see me and see your power in me. You look at the heart, Lord, search my heart and make my heart clean – prepare me for your work. Amen.

PLACE OF GRACE Prayer for February 4

Serve the body of Christ with Love and Joy. Prayer for...