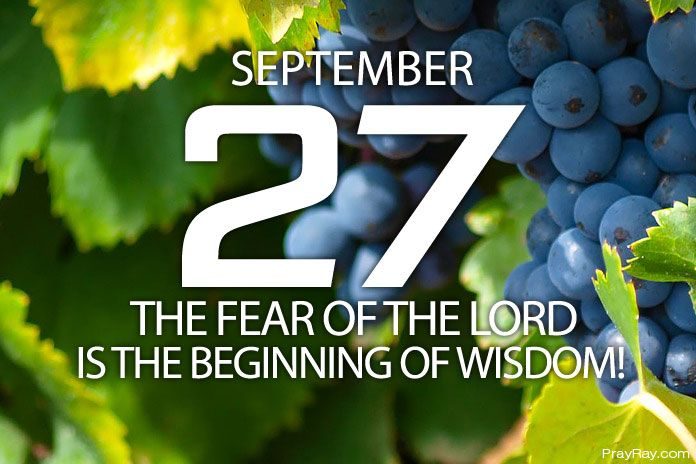 Fear of God is the beginning – Prayer for September 27. Praise the Lord everybody! There was a time in America when a man described someone he respected as an upstanding citizen. He was called a “God-fearing” man, which meant “a man who could be trusted”. You heard that term a lot in this country when it was considered a ‘God-fearing, Christian’ country.

The fear of the Lord is the beginning of wisdom;
all who follow his precepts have a good understanding.
To him belongs eternal praise. (Psalm 111:10)

The fact that there used to be people all over the country who were considered “God-fearing”, and that the fear of God, according to God’s Word, is only “the beginning of wisdom”, says a great deal about the state of America, then and now.

There was a time when we, as a country, knew that God was the hope of this nation and that in all things we must turn to Him for wisdom. Now we respect a man more than God. How another person feels is more important to us than how God feels. We try not to offend people and talk about “political correctness”, but we offend God daily by our behavior.

Father God, help us to remember who we were in you

God is looking for people who fear Him enough to reject all evil and avoid practicing it, people whom He can show in Satan’s face when the accuser of the brethren comes.

Where are the God-fearing men of this world? That is a question we all must ask ourselves when we look in our mirrors every morning because that’s where it starts, it starts with us. God bless you all.

Fear of God is the Beginning Prayer for Today

Father God, help us to remember who we were in you. Give us back as people, the fear of the Lord we once had, which is the beginning of wisdom. In Jesus’ name, we pray, Amen.

MIRACLE IN THE MANGER. Christmas Eve Prayer for December 24

The Time of Grace. Devotional for Today, October 7