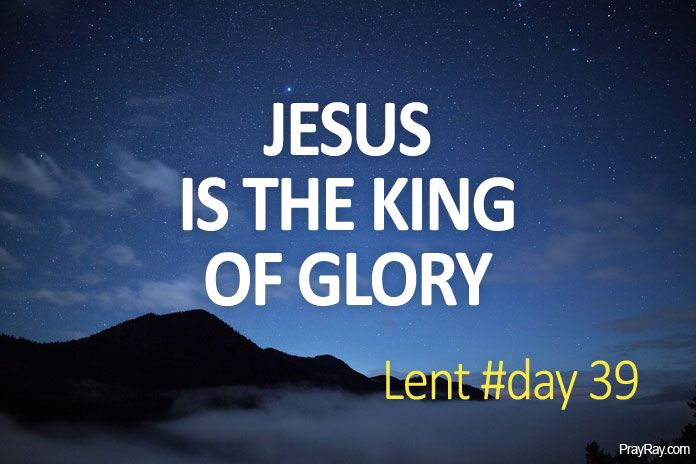 Jesus has power over all things – Prayer for Lent #day 39. Tomorrow is Palm Sunday and we will hear about Jesus as a great king, the one that came to rule the world. He came to take the kingdom of the earth from the dark rulers and brought light.

“And those who went before and those who followed were shouting, “Hosanna! Blessed is he who comes in the name of the Lord! Blessed is the coming kingdom of our father David! Hosanna in the highest!” (Mark 11:9-10)

We may be wondering, why would people put lay down their clothes and even the branches of the tree and lay them down for Jesus to pass? The simple answer is that they recognize the kind of king Jesus is.

Right from the Old Testament, before the time of the kings, we saw how the judges in Israel judged the people and helped them to win wars – they were there to show example and to keep the balance between the different tribes present. It was a normal thing they were doing and they take positions.

Later the Israelites asked for a king. God gave them kings. What was the role of a king? It is to lead the people, to perform the role of the judges, to build the kingdom, and also to fight wars. We can see that David, as a king in Israel fought wars and conquered. That is the work of the king.

These kings in the Old Testament were limited – they can only save their people within their country. The difference between them and Jesus is that Jesus has power over all things on the earth. No one can challenge him.

Jesus came down from glory, He came from God Himself, and lastly, he came to save the people by giving his life. There are many miracles that Jesus performed and he set the captives free. Luke 4:8 “The Spirit of the Lord is upon me because he hath anointed me to preach the gospel to the poor; he hath sent me to heal the brokenhearted, to preach deliverance to the captives, and recovering of sight to the blind, to set at liberty them that are bruised.”

All of these qualities made Jesus a true king and the kind of King that will never leave his people alone.

Jesus is also the king of glory

Jesus Has Power Over All Things Prayer for Today

Lord, I accept you as my king, you are a great king who has come to save me from destruction. I pray that you alone will continue to rule in my heart. The enemy, Satan will never rule over me. Take control of my life as I give it to you today. Amen.

Also read: JESUS IS THE ONLY WAY Lent #day 38

HEARING GOD’S VOICE Why you must Listen to God. Prayer for...